In the last post, I gave a teaser on how finite-blocklength information theory can help us identifying the triplets $(k,n,\epsilon)$ for which a $(k,n,\epsilon)$ code can be found. Let us illustrate this with the following figure: 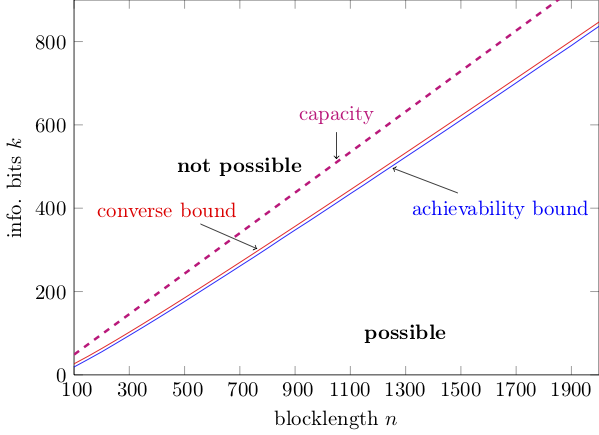 This is essentially the same figure I showed in part 2, but now I have put information bits rather rate on the y-axis. The figure illustrates achievability and converse bounds on $k^\star(n,\epsilon)$ as a function of $n$ for $\epsilon=10^{-4}$ and $\rho=0$ dB (here, $\rho$ is the SNR associated to the reception of our BPSK symbols).

I also plotted in magenta the curve $k^\star(n,\epsilon)=C n$ with $C$ standing for channel capacity, which comes from an asymptotic capacity analysis. Please note that this curve is just an approximation that is valid only in the asymptotic limit $n\rightarrow \infty$.

The figure tells us that all $(k,n)$ pairs that lie above the converse (red) curve are not feasible, whereas the $(k,n)$ pairs that lie below the blue (achievability) curve are feasible. We cannot say anything about the pairs between the two curves. This is a consequence of the fact that we cannot determine $k^*(n,\epsilon)$ exactly because, as discussed in the previous post, finding it involves an exhaustive search over a number of codes that grow double-exponentially in $n$ for a fixed rate. Luckily, our bounds are tight and the region of $(k,n)$ pairs we cannot characterize is small.

Note also how more accurate the classification enabled by FBL-IT is compared to the one based on capacity.

In the remainder of this post, I will explain how to evaluate the achievability (blue) curve shown in the figure. I’ll discuss the converse bound in the next post.

Achievability bounds in finite-blocklength information theory give us a lower bound on $k^\star(n,\epsilon)$, and, hence on $R^\star(k,n)$, or, equivalently, an upper bound on $\epsilon^*(k,n)$ for a given SNR value.

Many such bounds are available in the literature: some are based on threshold decoding, such as the dependence-testing bound. Some are based on hypothesis testing such as the $\kappa\beta$ and the $\beta\beta$ bounds. Here, I will review a variation of the random-coding union (RCU) bound 1, called RCU bound with parameter $s$ (RCUs) 2. This bound, which gives the achievability curve showed in blue in the plot, is appealing because

Like most achievability bounds in information theory, the RCUs bound relies on random coding. What does this mean? The goal is, for fixed $k$ and $n$, to produce a code whose probability of error can be upper-bounded by a function of $k$ and $n$ that is reasonably easy to compute. The proof methodology is, however, not constructive in that it does not give us an actual code.

Indeed, rather than analyzing the performance of a given code, we analyze the average performance of a random ensemble of codes, whose codewords are drawn independently from a given input distribution. Then, we show that the average error probability, averaged over this ensemble is upper-bound by a suitable, easy-to-evaluate function of $k$ and $n$. Finally, we conclude that there must exist at least a code in the ensemble whose error probability is upper-bounded by that function.

I will state for future uses the RCUs bound in a more general setup than the bi-AWGN channel. Let us denote by $P_{Y^n | X^n}$ a general channel law that characterizes the input-output relation of blocks of $n$ symbols of a generic channel. For example, in the bi-AWGN case, we have

We are now ready to state the RCUs bound.

I will next provide a proof for this bound. Implementation details, including a matlab script are given at the end of the post.

Let $M=2^k$ be the number of messages associated with the $k$ information bits. We assign to each message an $n$-dimensional codeword $C_j$, $j=1\dots,M$ generated independently from $P_{X^n}$. We shall analyze the average error probability under maximum-likelihood decoding, averaged with respect to all possible codewords generated in this way. The reader familiar with the derivation of Gallager’s random coding error exponent 3 will recognize most of the following steps. For a given realization $c_1,\dots,c_M$ of our random codebook, the error probability can be upper-bounded as

In words, under maximum-likelihood decoding, an error occurs whenever the transmitted codeword has a smaller likelihood than one of the other codewords. The inequality here comes from the fact that we assumed that all ties produce errors, which is pessimistic. We now average over all codebooks. Since all codewords are identically distributed, we can assume without loss of generality that the transmitted codeword is the first one. Hence,

Here, the $\min$ tighten our results by ensuring that our upper bound on the probability term does not exceed $1$. Now, since all codewords $C_2,\dots,C_M$ are identically distributed, the $(M-1)$ probability terms are identical. Let us denote by $X^n$ the transmitted codeword and by $\bar{X^n}$ one of the other codewords:

Using the observation above and the notation just introduced, we can rewrite our bound as

This is precisely the RCU bound proposed in 1 .

Unfortunately, this bound is difficult to compute for the bi-AWGN channel. Indeed, no closed-form expression for the probability term in the bound is available. And a naïve Monte-Carlo approach to compute this term is unfeasible (although more sophisticated saddle-point approximation methods could be adopted instead). To see why, assume that $k=100$. Then, to compute the RCU bound, we would need to evaluate tail probabilities as small as $2^{-100}\approx 10^{-30}$.

Applying this inequality to the probability term in the RCU bound, for fixed $X^n=x^n$ and $Y^n=y^n$, we obtain

Substituting this inequality into the RCU bound \eqref{eq:RCU}, we obtain the desired RCUs bound after algebraic manipulations.

Evaluation of the RCUs for the bi-AWGN channel 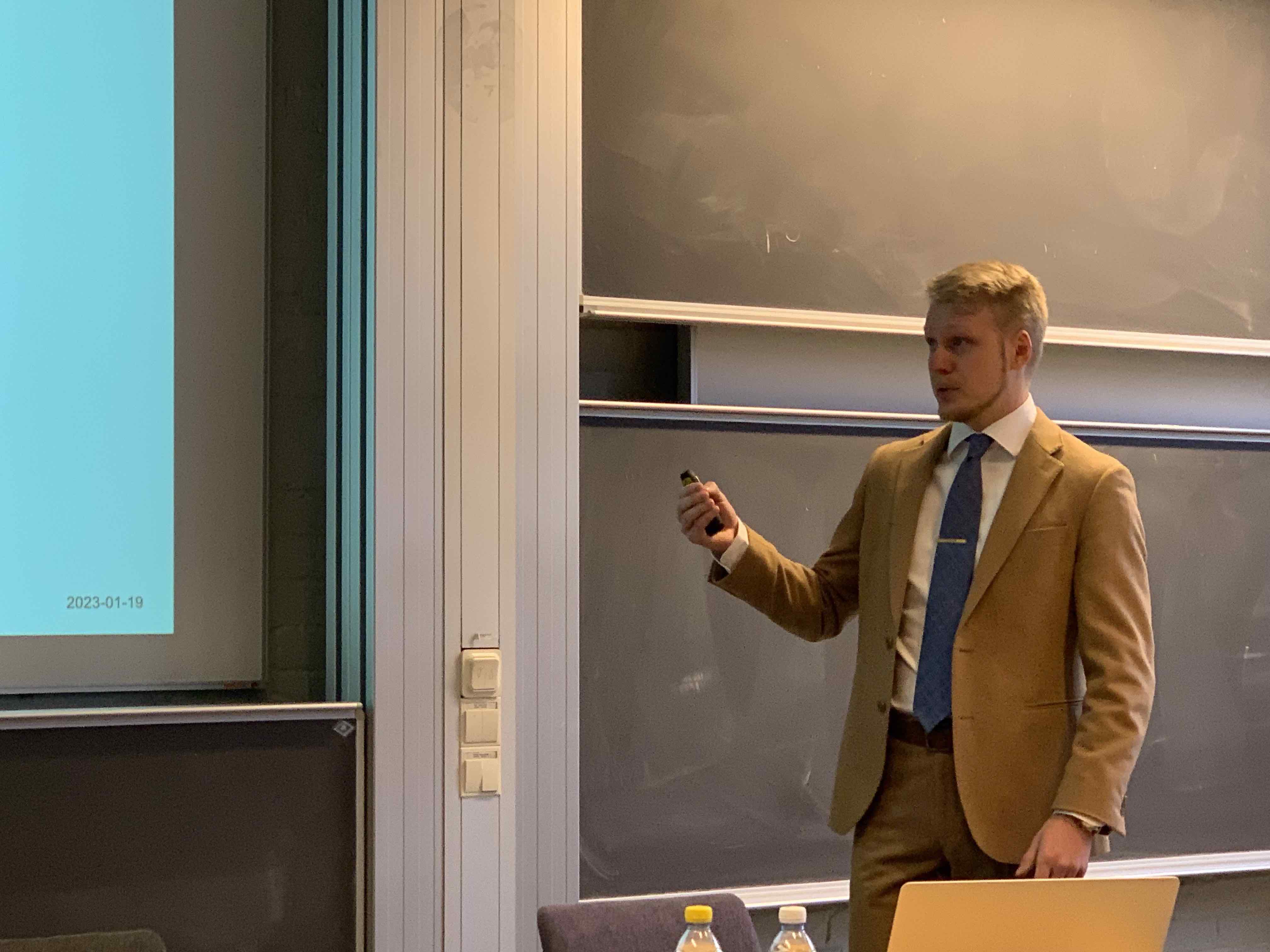